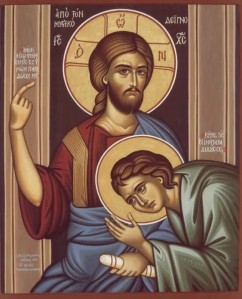 When I was a child, I remember watching the children’s television show Sesame Street. That show used to have a segment where they would put up four images and sing a song “One of these things is not like the others!” I can very easily see some clever Sunday school teacher working this segment in with the four Evangelists. Three of the Evangelists are really quite similar; then there is St. John. St. John is not like the others.

St. John is a unique witness to both the life of Christ and the earliest Church. St. John along with his brother St. James, the sons of Zebedee who were also known as the Sons of Thunder, were among Our Lord’s first Apostles being called immediately after Saints Andrew and Peter. St. John, along with Saints James and Peter, made up a unique inner circle among the Apostles. The three men in that inner circle were the only witnesses to the healing of St. Peter’s mother-in-law (St. Mark 1:29), the Great Catch of Fish (St. Luke 5:10), the raising of the daughter of Jairus (St. Mark 5:37 and St. Luke 8:51), the Transfiguration (St. Matthew 17:1; St. Mark 9:2; and St. Luke 9:28), and the Agony in the Garden of Gethsemane (St. Matthew 26:37; St. Mark 14:33). What is even more intriguing is that, in spite of being on of only three witnesses at all of those events, St. John chose not to recount those events in his own account of the Life of Christ. In addition to being part of Jesus’ “Inner Circle,” St. John was the disciple “whom Jesus loved” (St. John 13:23) and the “other disciple” who followed St. Peter into the courtyard of the High Priest once Jesus had been captured (St. John 18:15). Finally, unique among all of the disciples, St. John was the only Apostle present at the foot of the cross during the crucifixion, and it was to St. John that Our Lord entrusted His Blessed Mother (St. John 19:25-27).

His presence at these events give him the most unique and insightful perspective on the life, death, and resurrection of Our Lord Jesus Christ. What the other Evangelists present regarding the crucifixion, they learned from St. John. Biblical scholars will often group the first three Evangelists together and refer to them as the “Synoptic Gospels” (Greek for “with the same eyes”) since their account of the life of Christ is so similar. Everyone acknowledges that St. John has a different view of Jesus. That is not to say that any of the Evangelists portrays a wrong or inaccurate account of the life of Christ; St. John simply saw things differently. He did not have the perspective of the redeemed tax-collector, or the restored boy, or even the physician. His was the perspective of the Apostle whom Jesus loved, to whom Jesus entrusted His Blessed Mother, and who was there when He breathed His last breath. It was St. John who, in Our Lord’s teachings, heard Jesus invoke the Divine Name and identify Himself as the LORD. It was St. John who recorded Nicodemus’ late night visit to Jesus and Our Lord’s special teaching that night. One commentator noted that St. John did not include the Transfiguration in his Gospel because St. John always saw Jesus with the Glory of God upon Him. His perspective was indeed unique.

His life after the Resurrection was also unique. His brother, St. James the Apostle, died at the hands of Herod Agrippa. That led to a great dispersion and many of the Apostles ended up traveling abroad to spread the Gospel. Tradition tells us that, one by one, each of the Apostles was martyred for the faith in Christ Jesus they professed. Each one, that is, except St. John. St. John migrated north, likely passing through Antioch, before settling in Ephesus in Asia Minor. There he ran afoul of the local authorities and they decided to kill him by immersing him in a cauldron of boiling oil. Miraculously, he survived and the authorities exiled him to the island of Patmos. It was during his exile on Patmos that he received his beatific vision of Heaven which we have recorded at the Book of the Revelation. After some time, St. John was freed from exile and returned to Ephesus. Near his death, St. John composed his Epistles which were sent to the various churches in Asia Minor. In these Epistles, St. John refers to himself as “the Elder.” This makes sense considering this was likely around 96AD. If we assume that St. John as eighteen when Our Lord was crucified, the Beloved Apostle would have been born around 15AD and would have been eighty years old near the time of his death. He was quite likely the oldest man that anyone knew!

Consider what the Beloved Apostle’s life must have included. Consider the events which he experienced. He was the only apostolic witness to the death of Jesus and one of the first witnesses to His resurrection. He was there at Pentecost, encountered the converted Paul of Tarsus, and saw his own brother slaughtered in the streets of Jerusalem. He cared for the Blessed Virgin Mary, attending to her as a son would until her Blessed Son called His Holy Mother to return to Him. He received word of the death of every one of his closest friends, one after the other, dying a martyr’s death in the scattered provinces of the Roman Empire and beyond. They tried to martyr St. John and instead exiled him to some desert island. There he had the single most incredible vision of Heaven and the future ever experienced by anyone living including Daniel. Having lived out his life well beyond what anyone could have expected, having trained up the next generation of Christian leaders in Asia Minor, he composed a Gospel, three epistles, and a revelation of Heaven. Then, completely unique among the Apostles, he died peacefully and went on to again see the face of the Lord who loved him and whom he loved in return.

St. John is one of my heroes.

I would have loved to have been among Saints Polycarp and Ignatius, the Apostolic Father, leaders of the church one generation after the Apostles, who sat at the feet of St. John and heard him teach. I imagine walking with him and catching glimpses of him staring off vacantly and wondering if he were recalling the past or the future. May we, like St. John, have the grace to endure to a great and mighty age and accomplish great and mighty works in our latter years.

Shed upon your Church, O Lord, the brightness of your light; that we, being illumined by the teaching of your apostle and evangelist John, may so walk in the light of your truth, that at length we may attain to the fullness of eternal life, through Jesus Christ our Lord, who lives and reigns with you and the Holy Spirit, one God, for ever and ever.  Amen.

7 responses to “St. John the Beloved: Not Like the Others”