Spoiling a Legacy Just When We Could Have Used It

Mark Hamill is not a fan of his recent roles in the last two Star Wars movies and he has not been keeping that opinion to himself.  Finding actor an who criticizes his own character and the studio producing his films, while his role in the franchise is still 0n-going, is a rarity, but this is especially unique considering that Hamill has brought to life one of the most iconic science-fiction characters of the last forty year, the Jedi Luke Skywalker.

A quick search of YouTube will find countless videos of Hamill  expressing his dissatisfaction that iconic “Legacy Characters” were never reunited on screen before their deaths.  He laments, along with the fans, that his character had only the briefest of scenes, barely a cameo, in the franchise re-igniting The Force Awakens.  Most of all, it seems to me, he is disappointed that the character that made it onto the big screen in The Last Jedi was nothing like he envisioned for the character he made iconic over the last four decades.  I wholeheartedly agree.

One of my very first cinematic memories is that of my great-grandparents (God rest their souls) taking me to see Return of the Jedi when it was in the theaters in 1983.  I was six.  I remember that Grandpa Looker was grumpy because the movie, by today’s standards a meager two hours and 16 minutes, was long enough back then that he had to go add more change to the parking meter!  I remember Luke Skywalker embodying both heroism and mystery as he strode, hooded and cloaked, dressed all in black, into the crime lord’s palace to rescue his friends.  Even after he fell into the trap, he displayed resolute confidence, standing on the scaffolding, hands bound, moments from being pushed to his doom, as he warns Jabba the Hutt that there was still time for the crime-lord to “free us or die.”  I can feel the incredible John Williams’ soundtrack resound in my mind as I relive the fight that followed.  In hindsight, the scene is not without its flaws; but as a six-year old boy, it was the greatest scene ever put on film.

Towards the end of the movie, Hamill’s Luke Skywalker turns himself into the Emperor and Darth Vader to protect his friend, fights to rescue his father from the Dark Side, and finally throws down his lightsaber, refusing to choose the path hatred and fear.  That was some mighty zen stuff for my little six-year old brain!  You could fight, but not be angry?  You could win by not fighting?  Ultimately, it was Luke’s suffering that brought his tormented father back from the Dark Side and defeated the Emperor.  That was profound cinema for some popcorn sci-fi!

Confession time: I was not raised in the Church.  I grew up in the Middle-East and Christianity was not really part of my upbringing.  I did not have a prolonged experience of Church until I was sixteen years old.  It was very new to me.  Around Christmas of my senior year in high school, I first visited the congregation where I am now the senior pastor.  That congregation was and remains a part of a denomination that is both Evangelical, Charismatic, and Sacramental.  It was the first time I ever really encountered a priest.  Even more, these priests (and many others in the congregation) had the Baptism of the Holy Spirit.

Had I grown up in the Church, I probably would have had many historical and literary examples of godly and saintly living.  If you go to any Christian book store you can find “Lives of the Saints for Kids” or biographies of famous evangelists and preachers throughout history.  I did not read those books growing up.  When I received my call to the priesthood in the summer between my sophomore and junior years of college, my role-models for priestly ministry were the brothers in Christ who became my peers and colleagues.

If I am really being honest, Hamill’s Luke Skywalker largely informed how I think about my walk of faith as a priest.  Yes, as silly as it seems, it is true.  To a small extent, it still is.  Those memories from childhood still form a foundation from which college, seminary, and two decades of ministry have built upon.  I still think about the faith of that man dressed all in black who walked into the enemy’s palace with total calm and total confidence.  In Star Wars they called it “trusting in the Force.”  We just call it Faith.   I think of that man in black throwing down his lightsaber and rejecting evil.  It made an impact.

I can totally understand why Hamill would be disgruntled at what’s become of that hero in recent days.  When Disney bought Lucasfilm, including all the rights to Star Wars, and Mark Hamill, Carrie Fisher, and Harrison Ford all agreed to be in the new trilogy of movies, fans were ecstatic!  I remember watching the trailer for The Force Awakens over and over again because it looked so good.    Initially, fans were thrilled with The Force Awakens when it premiered in 2015.  It was the first time we had seen these characters together in 32 years… except they were not together again.  Luke did not appear until the very final scene and, spoiler of spoilers, they killed off Harrison Ford’s Han Solo.  Still fans were generally forgiving of that.  Skywalker’s final scene left an incredible cliffhanger and Ford had been begging for his character to die for 35 years.  Most likely, it was the only way he agreed to come back.

Then came The Last Jedi and, to make an ugly story short, fans were divided.  Some loved it and some hated it.  Social 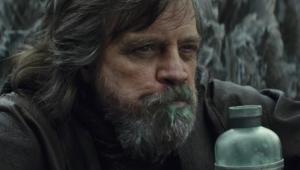 media went berserk.   One actress left social media altogether because of the sheer amount of negativity which she received.  Russian trolls were blamed for the movies bad reviews.  Ugliness abounded.  From a certain point of view, some of that ugliness was justified.  The movie reveals that Luke Skywalker, one of the greatest and most iconic science-fiction heroes of all time was scared of the power of his nephew so he attempted to murder him in his sleep.  Having ignited his blade, he realized, “this is the worst idea EVER!” and paused.  At that moment, his nephew, Leia and Han’s son, fought Luke off and then proceeded to kill all of the other apprentices and join the totally-not-the-Empire First Order.  In penitence for trying to murder his nephew/apprentice in his sleep, getting all of his other apprentices murdered, losing his nephew to the Dark Side, Luke disappeared to an ancient Jedi hermitage where he can hide out for years and years, growing a surly beard, and guzzling green milk straight from a sea monster’s teat.  It’s horrible.  Skywalker does return in the end to confront his nephew in an impressive fight scene, but that scene culminates with Skywalker’s death.

As an English teacher for over fifteen years, I taught students to read between the lines and look for messages.  The message in The Last Jedi is terrible.  The hero becomes a would-be child murderer, responsible for the slaughter of all those under him, and then, rather than dealing with the consequences of his actions, he runs and hides.  Now this may well be realistic.  People fail.  They fail catastrophically.  They blame others or just run away.  That’s reality.  But we don’t to go movies to see reality.  We don’t even watch “Reality TV” to see reality.  When we go to movies we want to see heroes achieve the impossible and succeed over insurmountable obstacles, even overcoming death itself at times.

What Disney and The Last Jedi did to Luke Skywalker is tragic.  They took one of the most iconic, heroic figures of science fiction, a figure who had endured in the hearts and minds of fans for over forty years, and they spoiled him.  Theories abound about why they did it and what their motives could have been, but it’s clear that the Luke Skywalker, at the end of The Last Jedi, is no mentor and no role-model.  Mark Hamill is right to be disgruntled about how they’ve treated this character which he brought to life and made famous.  I’m disgruntled with him.  The forty year-old me would have liked another role-model like the six year-old me had back in the day.

Tagged as Disney, Luke Skywalker, Mark Hamill, Star Wars, The Force Awakens, The Last Jedi, The Return of the Jedi